The number one source of depression and anxiety is a drug that also tastes hundreds of times sweeter than sugar. This drug was illegal in America for decades, until 1980, when the FDA changed “heads” and Big Pharma took over. You can only guess what followed: prescription drugs for adults and children alike who suffer from depression, panic attacks and anxiety. 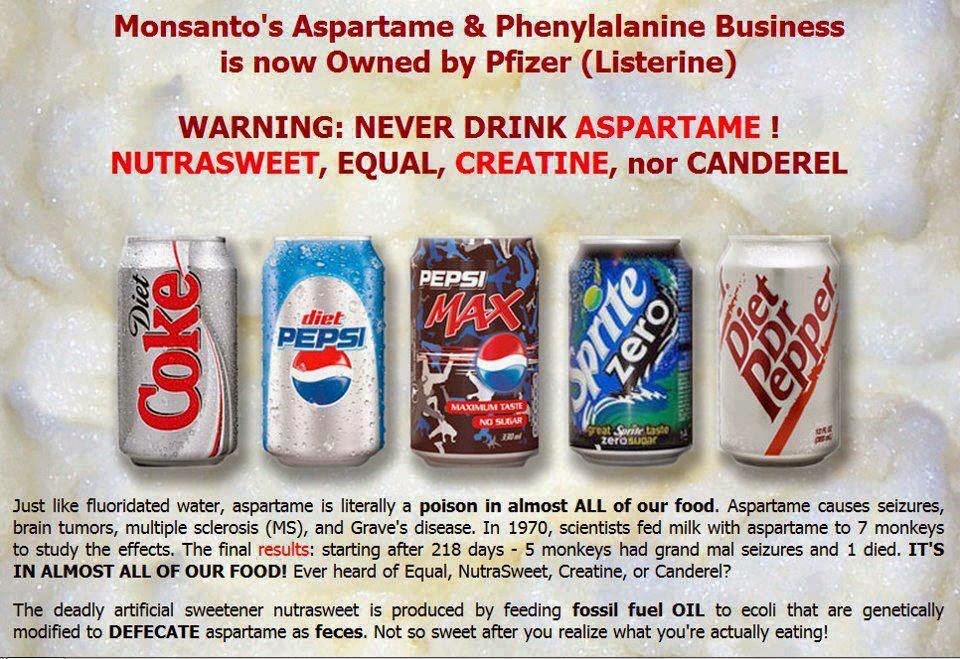 The formula for “success” was quite simple: drug people with diet soda and weight loss products that contain aspartame, then prescribe them drugs made by the same company that brought you “sweet misery” in the first place. The formula was implemented by the companies which manufactured and marketed poison for consumption, and then manufactured and marketed chemical pharmaceuticals (SSRIs) to treat the “symptoms” of anxiety and depression. Of course, these symptoms were never attributed to food, candy, gum or soda containing extreme central nervous system toxins.
Got vertigo? Aspartame. Got panic attacks? Aspartame. Got milk? Yes, they’re starting to put aspartame in conventional milk. It may not even be labeled. Get ready for more of that “sweet misery.”

“Too much phenylalanine, a key component in Aspartame, can decrease serotonin levels and lead to depression. What would one need if they were, say, suffering low serotonin levels that contributed to depression? Oh why, a selective serotonin reuptake inhibitor (SSRI) of course! The global pharmaceutical company with extensive Bush family ties, Eli Lilly, got its SSRI Prozac approved in 1987, and the drug first appeared on the market in 1988. In just two years’ time, Prozac became the ‘most prescribed’ SSRI in the United States.”

Here is exactly how aspartame creates depression and exacerbates anxiety: Aspartame kills certain neurons by allowing the influx of too much calcium into the cells. By mimicking neurotransmitters, aspartame actually facilitates the transmission of information between neurons, triggering excessive amounts of free radicals to invade, killing the cells. It opens the door for the “criminals” to rush in. This literally “excites” the neural cells to death. The term for these toxins is “excitotoxins,” and the all-too-familiar MSG (monosodium glutamate) is the second most toxic excitotoxin on the market.

Scary facts you may not know about aspartame 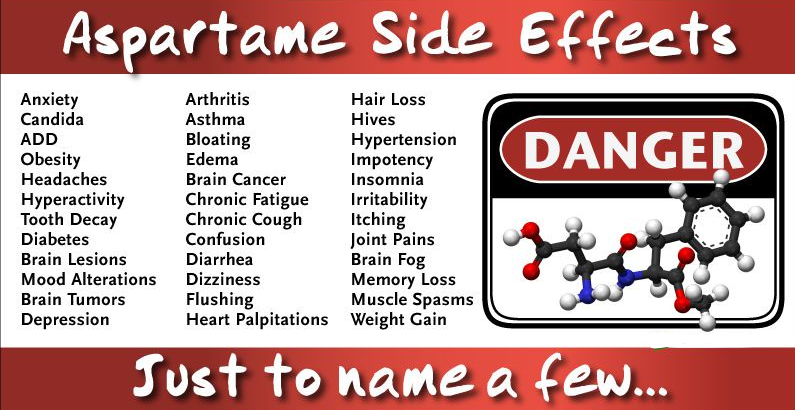 Aspartame has never been tested on humans for safety.

Over a billion people consume aspartame in their foods and beverages across the world daily, believing it to be a safe ingredient.

Aspartame is the number one sweetener used in U.S. hospitals by doctors, nurses, visitors and patients.

Each of the three ingredients in the synthetic, chemical combination Aspartame – which is comprised of 50 percent phenylalanine, 40 percent aspartic acid, and 10 percent methanol – pose their own dangers.

The EPA’s recommended limit for consumption of methanol is 7.8 milligrams per day, but a one liter bottle of an Aspartame-sweetened beverage contains over 50 mg of methanol! Heavy users of Aspartame-containing products consume over 250 mg daily of methanol – that’s 30 times the EPA limit!

In 2013, The IDFA (International Dairy Foods Association) and the NMPF (National Milk Producers Federation) filed a petition with the FDA to change the standard entity of milk plus 17 other dairy products so that they can add Monsanto’s aspartame and not even label the products accordingly!

Aspartame is found in thousands of foods, drinks, candy, gum, vitamins, health supplements, over-the-counter medications for adults and children, and yes, even pharmaceuticals.

Aspartame accounted for over 75 percent of all side effect complaints received by the FDA’s Adverse Reaction Monitoring System (ARMS) over the past four years.

Aspartame is banned by health-conscious countries all over the world, especially where there is a national healthcare system in place.

Aspartame is best known by the brand names NutraSweet, Equal, Sweet One and Spoonful.

The following is a quote from the documentary film, Sweet Misery, a Poisoned World:

“Aspartame is a toxic food that came into the world as an investment by Donald Rumsfeld, while ignoring the deadly effects the tests showed.”

The following is a direct quote from the U.S. National Library of Medicine; National Institutes of Health (NIH):

“Aspartame, a widespread sweetener used in many food products, is considered as a highly hazardous compound. … Astrocytes are glial cells, the presence and functions of which are closely connected with the central nervous system (CNS). The aim of this article is to demonstrate the direct and indirect role of astrocytes participating in the harmful effects of aspartame metabolites on neurons.”

Even just a single use of Aspartame (50 percent phenylalanine) raises the blood phenylalanine levels, which can be concentrated in parts of the brain, causing serotonin levels to decrease, leading to emotional disorders like depression, thus making it highly dangerous for infants and fetuses.

Methanol (10 percent of aspartame’s content as wood alcohol) is a known carcinogen that, when heated by the human body, becomes formaldehyde (embalming fluid for corpses). This poison is distributed throughout the body, including the brain, muscle, fat and nervous tissues, and then enters cells and binds to proteins and genetic material (DNA).

And last, but definitely not least: Ingestion of methanol causes both retinal damage in the eyes and horrendous birth defects.

Start cross-checking your food, drinks, candy, gum and medicine; read the labels on everything you consume; filter synthetics; and end the aspartame nightmare.