Joao Teixeira de Faria – known as John of God – achieved international fame after being interviewed by Oprah Winfrey and having a list of famous clients, including Bill Clinton.

Two months ago, his world crumbled after police discovered evidence that he was a mass murderer, baby trafficker, and sex slave ringleader.

Mirror.co.uk reports: The 77-year-old was arrested a week later in what prosecutors say could be the worst serial crimes case in the country’s history.

Faria’s own daughter, Dalva Teixeira, has also spoken out, called him a “monster” and claiming he molested her as a child.

The case has shocked Brazilians, many of whom regarded the so-called ‘psychic surgeon’ – famous for performing procedures such as removing tumours or cataracts with his hands and without anaesthesia – as a modern-day miracle worker.

And last week even more explosive acccusations have been thrown at John of God.

Brazilian activist Sabrina Bittencourt, whose investigations led to Teixeira’s arrest in December, now claims the celebrity medium ran a baby trafficking operation where children were “farmed” in Brazil before being sold to childless couples around the world. 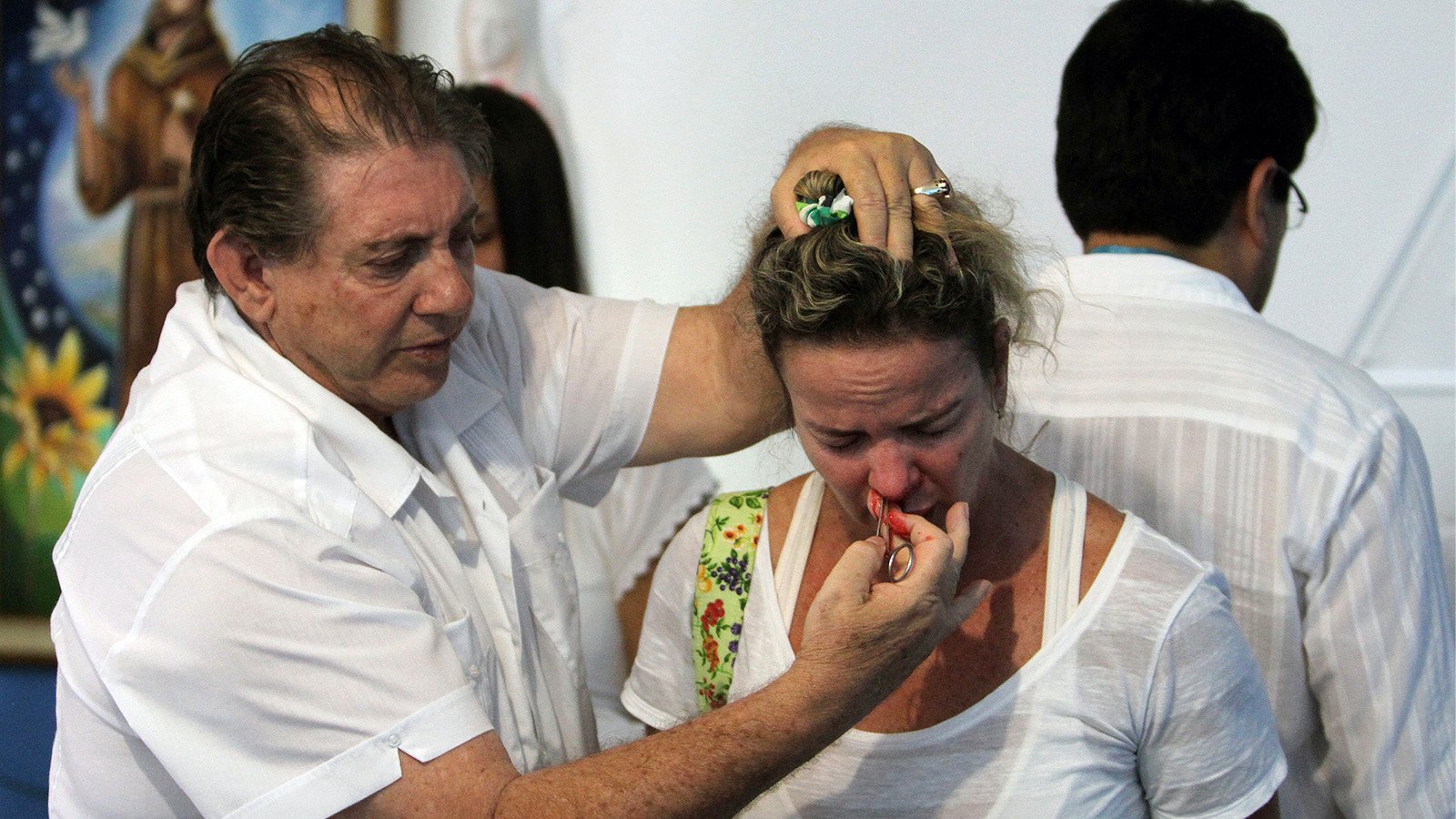 Shockingly, she claims young girls were held captive in remote farms where they were forced to produce babies – before being murdered after 10 years of giving birth.

In a video, Bittencourt, whose organisation, Coame, helps women report sexual assault by religious leaders, said she has spoken to women from at least three continents, including Europe, who claimed they bought Brazilian babies from John of God for as much as £40,000.

And she claimed she has collected testimony from former members of Teixeira’s gang, which described how the scheme worked after they became “tired of being complicit” in his crimes.

Bittencourt, who now lives outside Brazil under the protection of international organisations after receiving death threats for her work, claimed Teixeira would offer money to poor girls aged 14 to 18 to go and live in mineral mines or farms he owns in the Brazilian states of Goias and Minas Gerais.

There they would become sex slaves at and be forced to get pregnant and give birth to their babies.

She claims: “In exchange for food, they were impregnated and their babies sold on the black market.

“Hundreds of girls were enslaved over years, lived on farms in Goias, served as wombs to get pregnant, for their babies to be sold.

“These girls were murdered after 10 years of giving birth. We have got a number of testimonies.”

She added: “We have received reports from the adoptive mothers of their children that we sold for between £15,000 and £40,000 in Europe, USA and Australia, as well as testimony from ex-workers and local people who are tired of being complicit with John of God’s gang.”

Appealing for others with knowledge of Teixeira’s crimes to come forward, she said: “I ask that the embassies of Holland, USA and Australia demand an impeccable conduct from the Brazilian authorities.”

The revelations will ignite even further anger in Brazil about the man who was once the country’s most celebrated faith healer and renowned around the world.

For nearly 20 years, John of God’s followers have flocked to the town of Abadiania, where his Casa de Dom Inacio centre is located, to be cured, blessed or enlightened by him.

The self-styled spiritual healer claims the spirits of more than 30 doctors and other entities can enter his body and that they perform the healings.

Oprah Winfrey vouched for João’s spiritual healing powers after visiting him in 2010 where she nearly fainted during the “blissful” encounter.

The TV host featured her healing experience in a since-deleted episode of the Oprah Winfrey Show titled ‘Leap of Faith: Meet John of God’, in which she described seeing him cut into the breast of a woman without anaesthesia and left feeling “an overwhelming sense of peace”.

Here’s a video of Ophra”s interview of John:

After his arrest Winfrey said in a statement: “I empathise with the women now coming forward and I hope justice is served.”

Australian reporter Michael Usher recounted a different experience when he visited Faria’s compound for the 60 Minutes programme in 2014.

He claims he saw the medium use scalpels to slice open people’s flesh or scrape away at their eyeballs.

He added: “John of God is not a surgeon, he is not a trained doctor.

“Yet he is presented with a tray of medical instruments, scalpels and all sorts of scissors.

“He takes a scalpel and scrapes eyes. He sticks knives and scalpels of some sort down the back of people’s throats, and he claims he is getting to tumours.

” None of it is done with an anaesthetic and you don’t even know if what he is using is sterile.”

A doctor who tested the pills, which generated more than £10million a year for John of God, found they were simple passionflower herbal supplements.

But claims he was a charlatan who was making millions from the sick and terminally ill did nothing to dent John of God’s popularity.

In December last year a Dutch photographer, Zahira Leeneke Maus, told a Brazilian TV channel that during a private session in his clinic Teixeira had manipulated her into performing sex acts and then raped her.

Nine other Brazilian women, who remained anonymous, also told the channel that he had abused them on the premise of transferring his “cleansing” energy.

The interview let to a cascade of allegations from women all around the world.

Their ages at the time of the alleged assaults, which took place from the 1980s through to October 2018, range from nine to 67, according to investigators.

All claim the medium invited them for private consultations, where he turned them to face away from him then performed sexual acts as part of their “cure”.

Finally, Faria’s own daughter, Dalva Teixeira, came forward with shocking revelations that she, too, had been a victim.

In an explosive interview with Brazilian magazine Veja, she said that under the pretence of mystical treatments he abused and raped her between the ages of ten and 14.

She claimed he stopped after she became pregnant by one of his employees, after which her father beat her so severely that she suffered a miscarriage.

“My father is a monster,” she said. 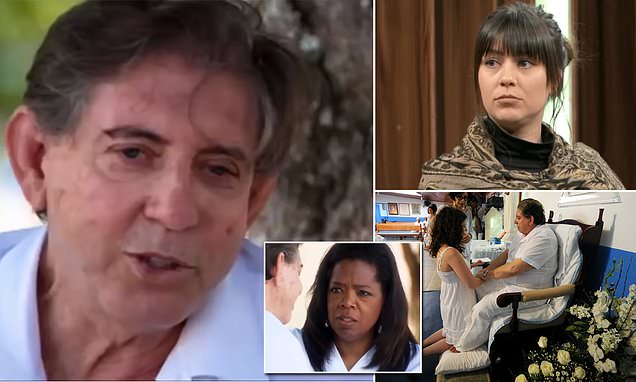 After an arrest warrant was issued for him, Teixeira was on the run for a week, during which time he withdrew £7million from several bank accounts, convincing police he could be planning to flee Brazil, or hide the money in case of compensation claims.

Investigators also found firearms and large quantities of cash in a house used by Teixeira as a spiritual retreat. 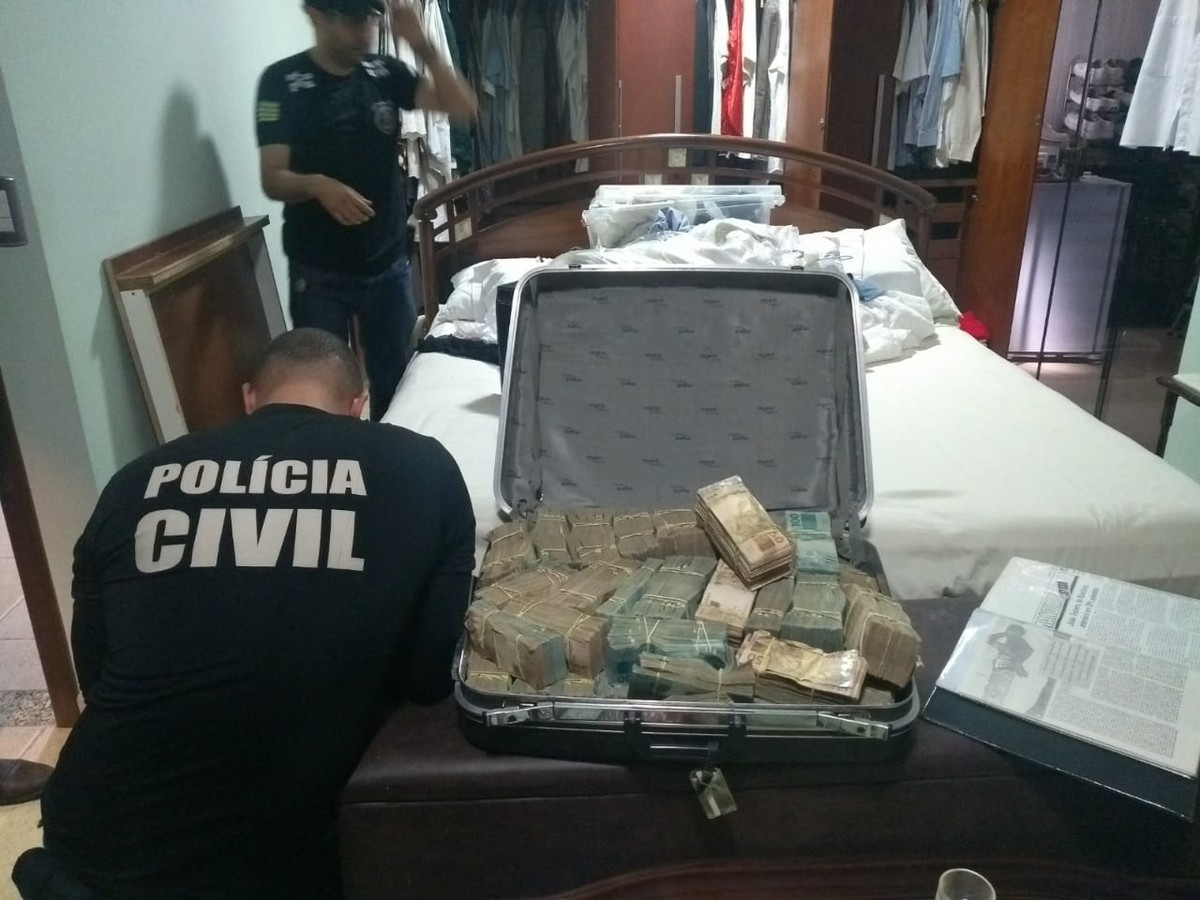 He eventually handed himself in on December 16, telling officers: “I surrendered to divine justice – and, as promised, I now place myself in the hands of earthly justice”.

Police who grilled him reported “bizarre” incidents during the interview, such as the computer typing the letters ‘OOOOOO’ repeatedly, the printer starting to print without receiving a command, and the mini-fridge in the room exploding, according to reports.

Meanwhile, a police clerk, who was meant to transcribe the faith healer’s testimony at the police station in the rural town of Annapolis, was run over in a car accident and broke his arm.

Teixeira has been charged with two counts of rape and two counts of statutory rape, as detectives continue to look into the abuse claims.

Last week prosecutors brought new charges against him, including that he and his son Sandro Teixeira de Oliveira threatened a victim with a gun, then offered her money, to withdraw a complaint of sexual abuse again the medium back in 2016.

I invite you to take a look at the video bellow  from STGreport about “John of god” arrest: