The Patriot group of ex-military, police officers and first responders is calling for volunteers with certain skill sets to join a “search and rescue” mission near Tucson, Arizona, to hunt for suspected child sex trafficking camps.

The call comes on the heels of a report by Veterans On Patrol (VOP) that members claim to have discovered evidence indicating children are being assaulted sexually and abused, perhaps by members of Mexican drug cartels and human traffickers.

A week ago, VOP released disturbing images and video footage of a suspected camp near Tucson including what appears to be a so-called “rape tree” containing straps and restraints as well as a suspicious water or septic tank that could be used as a “shelter” or to hold victims.

In addition, VOP members discovered children’s toys and clothing as well as pornographic magazines and materials, Oath Keepers said in an announcement on the organization’s website regarding “Operation Child Shield.”

“It could have been a homeless camp, where the people were just weird or mentally ill. But there are a group of trees that look like rape trees,” said Craig “Sawman” Sawyer, a former U.S. Navy SEAL sniper and founder of Vets 4 Child Rescue, in an interview with The Hagmann Report on Monday.

“Rape trees are essentially what the drug traffickers, coyotes, tend to want to use to rape people. They tie them to it and take their undergarments and hang them up on the trees as some sort of trophy. We found in this camp a group of trees with all manner of fires hoses nailed to them and loops and different straps and different types of rope.”

Sawyer said he was one of the persons who personally inspected the site. Others who joined him said people came away “traumatized” by what they witnessed at the site, including finding kid toys, boxes of condoms, and combs containing blonde hair.

Some said there may even be graves.

You can (and should) read more on the subject HERE.

Oath Keepers said that in response to the initial report the group sent “some of our most experienced Arizona LEO (law enforcement officer) leaders to the site to inspect it and interview witnesses.”

The group said that based on those interviews and the assessment of Sawyer and other former military members and EMS professionals, it was compelled to act.

“[W]e feel honor bound to deploy our most experienced LEO, military, and search and rescue personnel to search for additional possible sites of human trafficking and suspected child sex trafficking in the Tucson area,” the organization said in its call for volunteers and donations for the mission.

Sawyer said he also noticed several bottles of brown hair dye. Those who are familiar with cartel-related human-and-sex traffickers note that the “trade” goes both ways across the border — south to north and north to south — for delivery to pedophiles in North, Central and South America.

American children who are blonde are much more easily smuggled north-to-south if their hair is darker. 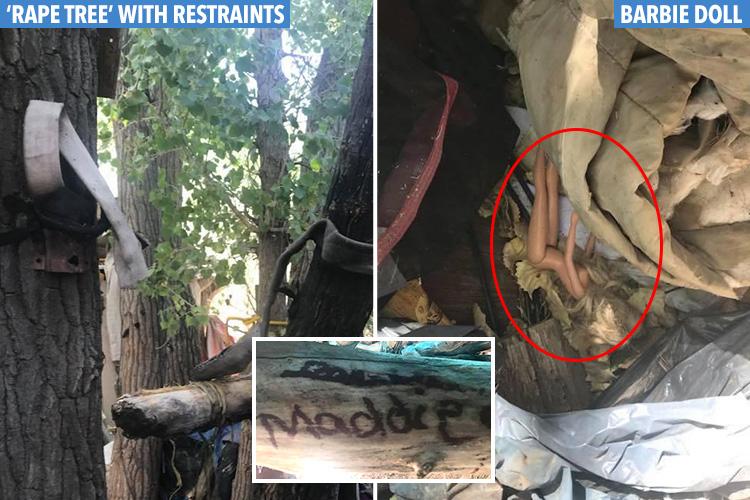 Oath Keepers said members spoke with a currently-serving paramedic and former U.S. Army MP who served along the Mexican border in 2008-09.

The paramedic said that what he saw in the VOP video “is entirely consistent with the rape trees he saw” during that Defense Department operation. He also recounted several instances where migrants reported being raped by their smugglers. That included children being raped in front of their parents.

In addition, some migrants reported that their children had been taken from them by the smugglers and never seen or heard from again.

Anyone who wishes to volunteer for the mission is instructed to email Oath Keepers at childshield@oathkeepers.org.

“Expect to be heavily and closely vetted,” the organization said of anyone seeking to volunteer.