Joe Biden is on the verge of announcing his run for president, according to multiple sources close to the former Vice President, a development that will resurrect questions about Biden’s behavior around women in the era of #MeToo.

ABC News reports that according to Robert Wolf, a top Democratic donor and former economic adviser to former President Barack Obama who has known Biden for over a decade, Biden is 90% sure of running for president.

“He feels he’s coming off an incredible midterm and he’s sitting in the best position to take on [President Donald] Trump across the country,” said Wolf.

Sen. Diane Feinstein also met with Biden last week and confirmed that she expected him to announce his candidacy.

“We are all anticipating it is not ‘if’ but ‘when’ he announces,” said James Smith, who ran for governor of South Carolina in 2018 and has been in recent touch with Biden’s staff.

However, just as the leftist media released a tape before the election to justify the ’ narrative that Donald Trump was a creep around women, Wich was and  is false and the that’s why people still voter for Trump despite all the democrats propaganda against him.

But Biden’s predator behavior towards females  especially underage girls, caught on camera, is much worse.

And this time, if bidden runs for president in 2020, we are ready to bet that CNN won’t even touch the subject on Bidden’s pedophile behavior.

Here’s one of the most well known creepy uncle joe video where we can see Bidden groping underage girls in front of their parznrs and whispering in their ears..very sickening behavior.

A February 2015 Washington Post article entitled What are we going to do about Creepy Uncle Joe Biden? highlighted the numerous instances of Biden putting his arms around women, many of whom looked incredibly uncomfortable at being accosted. 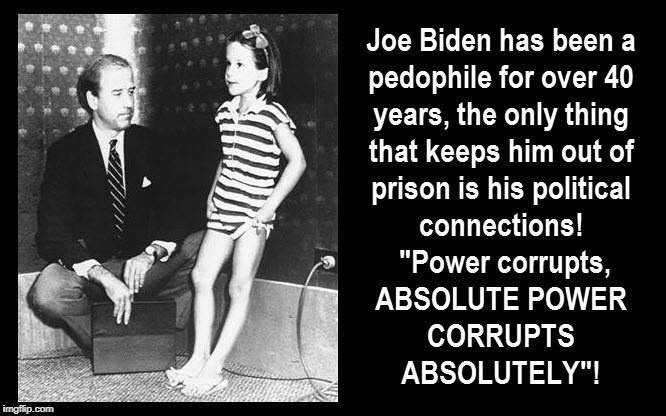 The Huffington Post also published an article (subsequently deleted) that acknowledged Biden running for president would be a “terrible idea in a post-Weinstein America”.

Back in November 2017, an ex-Secret Service agent even claimed that Biden engaged in “Weinstein-level” sexual assault and that he would walk around the VP residence late at night completely naked.

The agent, who spoke on condition of anonymity, revealed that Biden “would mess with every single woman or teen,” and that a Christmas get-together at the VP’s house had to be canceled “because Biden would grope all of our wives and girlfriend’s asses.”

As the video above documents, Biden is apparently unaware that grabbing on young women and children  while on camera isn’t the best optics for a potential future President of the United States.

It look like Bidden Sexual-Predator nature is  too strong to even hide it on camera..if he can do these kinds of things on camera, imagine what he probably does in private, that my friend is what we call a high level pedophile/Sexual Predator.

This man should be in jail and not running for president.