The small town of Dulce is located in the northwest of New Mexico. The town has a population of 900 people

The New Mexico Dulce Base does not have the popularity of Area 51 in the Nevada desert, but it is far more sinister than the famous Area 51.

Even the Hangar 18 from the military base called Wright of the Air Force (now Wright-Patterson), Near Dayton (Ohio), it’s not as sinister as this base.

Phillip Schneider was the first person to speak in public about this base and how he took part in a struggle, along with other soldiers, researchers, and aliens, including reptilians.

The story began to take shape in 1979 when the US Armed Forces began the project of building an underground military base.

Philip Schneider, one of the design engineers, has signalled that something dubious is happening underground.

The military base was rising rapidly and in some areas, access was limited. Green Berets and Special Forces kept these areas at the cost of living.

Dulce’s secret underground base would be located 4 km northwest of the city, being a mixed CIA-alien base.

Here, all kinds of experiments such as cloning, human aura studies, advanced mind control applications, the creation of animal-human hybrids, human abduction programs for all sorts of genetic experiments.

These underground bases, tunnel systems, and their technology have been described by former soldiers, slaves of mental control, and characters such as Phil Schneider, who helped build them. Schneider is the son of a World War II German commander, Otto Oscar Schneider.

His father was captured by the Americans and taken to the United States to work for secret government forces.

As in most cases, the children of Illuminati agents are raised to work for the same masters, and Phil Schneider had the task of building sections of many underground complexes in the United States.

Schneider made public a bizarre story that happened just before the project was over. Ever since that time, it has been rumoured that more aliens are being held underground.

One day, when the engineer was in one of the tunnels, he was unlucky to face up to a humanoid, green, extremely tall and bad smell.

At that moment the alarm came, and the American soldiers began shooting after the escaped alien prisoners.

Schneider had the chance to kill two of these creatures, so another one could shoot with some kind of laser balls to him.

His life was saved by a gesture of heroism from a soldier who threw himself in front of him and collected the bullets.

In total, 60 people have lost their lives in that battle against creatures from space.

The incident made Schneider investigate the case in detail. These bases are ultra-secret and consume about 25% of US GDP each year. It is also said that many aliens, captured in various ways, are used as guinea pigs in various experiments.

The equipment and technology in these secret military bases are state-of-the-art.

In this base, aliens make experiments on humans and animals.

Aliens, based on animal and human DNA, create humanoids.

There are over one hundred secret exits and over 3,000 surveillance cameras that provide security in the area.

The base is run by a Council. The relationship with the CIA is always kept. There are seven floors.

Aliens use levels 5-6 and 7. Everyone who comes in there is completely naked and weighed.

A code is given, and any weight change results in an alarm.

At the fourth level, studies and research are based on human aura, hypnosis, telepathy. At sixth level, there are the experiments laboratories.

According to a researcher who worked in those laboratories, the results of the experiments are frightening.

Three-legged humans, half humans, half octopus, human reptiles, lizards. The sounds that these beings leave are scary.

At seventh level, heads, embryos, human bodies are preserved in various solutions. Dulce aliens are considered to be the first inhabitants of the Earth and claim to be drawn from the cross between Homo Sapiens with a humanoid-reptile species.

This species was created by beings called Draco

After being kidnapped, people are being implanted. Skin, sperm, egg, DNA are taken.

Thanks to the implant, people undergo these experiments, without retaliation.

After the experiment ends, the subject no longer remembers anything.

They still betray the look that they have, and a constant, stupid smile.

Two of the bases where Schneider was present in Area 51 of Nevada and Dulce, New Mexico Dulce is a town of about 1,000 inhabitants, located in the Apache Jicarilla Reserve, at a height of nearly 2000 meters.

From there have been many reports of UFO take-offs and landings, “extraterrestrial” kidnappings, human and animal mutilation.

The same base is the place of the so-called “Dulce wars,” in which reptilians and Grays are said to have fought military and civilians.

There were many casualties in both camps, and Phil Schneider claims he also took part in this shootout.

He says he was hit by a laser weapon and he has a big scar on his chest.

His participation in the battle has been made public in a lecture since 1995, although many other elements appear in it:

“MY JOB WAS TO GET INTO THE HOLES AND CHECK THE ROCK SAMPLES, RECOMMENDING THE EXPLOSIVE FOR EACH TYPE OF ROCK. WE WERE AT A TIME IN A BIG CAVE FULL OF ALIENS KNOWN AS GRAY. I SHOT TWO OF THEM. WE WERE ABOUT 30 PEOPLE AND SUDDENLY THERE WERE ABOUT 40 ALIENS WHO WERE ALL KILLED. I THEN SAW A WHOLE UNDERGROUND BASE FULL OF ALIENS. LATER I LEARNED THAT THEY HAD BEEN LIVING ON THIS PLANET FOR A LONG TIME … THAT EXPLAINS A LOT ABOUT THE THEORY OF THE ANCIENT ASTRONAUTS. “

Schneider died on January 17, 1996, under very suspicious circumstances, which were made to be suicidal. In fact, he found himself “suicidal with a piano rope strangling.”

He had said, one year before, in a public lecture, that “at the crossing of each calendar year, military technology increases by 44.5 years (compared to the growth rate of” conventional “technology), and why it is easy to understand What in 1943 could be done by using vacuum tube technology to effectively displace a ship from one place to appear in another, “referring to the Philadelphia Experiment, in which an American military ship became invisible and translates into another dimension .

Another underground base where Schneider worked is under Denver International Airport, east of this city.

The construction has raised great problems because of the huge costs – as well as the giant beached by Bechtel as part of the “transport network improvement” in Boston, Massachusetts.

Denver Airport is full of statues of Gargoyle, Masonic and Illuminati symbols.

According to Schneider, there are at least 10 underground levels and a whole underground city with an area of 11 km.

The Denver base is said to include large “isolation camps” and underground spaces for incarceration of “dissidents”.

Workers on the lower levels of the base have seen many terrible scenes they have refused to talk about.

These bases are where millions disappear, yes, millions of children from all over the world.

I know it is hard to believe, but they are used for forced labour and then consumed by reptilians, as the cattle are by humans.

Dulce base workers in New Mexico reported that they saw the grotesque things at the lower levels of the base.

“LEVEL 6 IS ALSO CALLED THE” NIGHTMARE HALL “BECAUSE OF THE GENETIC LAB. THE REPORTS OF WORKERS WHO HAVE SEEN BIZARRE EXPERIMENTS ARE LIKE, “I SAW PEOPLE WITH MORE FEET, HALF A HALF-OCTOPUS, BUT ALSO REPTILIAN PEOPLE WITH HANDS OF PEOPLE CRYING LIKE BABIES. SO IS A MIXTURE OF LIZARDS – HUMANS, FISH, SEALS, BIRDS, AND MICE, ALL KEPT IN CAGES. I ALSO SAW WINGED HUMANOIDS, GROTESQUE CREATURES LIKE BATS, ONE METER TO OVER TWO METERS HIGH, BUT ALSO GURGLING AND REPTILIAN BEINGS.

“LEVEL 7 IS EVEN WORSE, ROWS AND ROWS OF COLD-KEPT HUMAN MIXTURES. LARGE STORAGE CONTAINERS FOR HUMANOID EMBRYOS AT DIFFERENT STAGES OF DEVELOPMENT. PEOPLE IN CAGES, USUALLY SEDATED AND DRUGGED, WHO SOMETIMES SCREAM AND BEG FOR HELP. WE HAVE BEEN TOLD THAT THEY ARE INCURABLE FOOLS, FOLLOWING VERY RISKY DRUG TESTS TO CURE MADNESS. WE WERE ADVISED NOT TO SPEAK AT ALL. AT FIRST, I EVEN BELIEVED IT ALL, BUT BY 1978 SOME WORKERS DISCOVERED THE TRUTH … “

This discovery led to the “Dulce wars” of 1979, the struggle between humans, on the one hand, and reptilians and reptilian grey, on the other, in which many scholars and soldiers died, a fight in which Phil Schneider claims He was hurt.

A Dulce security officer, Thomas Castello, has described a Dulce-based research in a UFO magazine. His information was named “Dulce Documents”.

Castello has been working for seven years for Rode Corporation, an Illuminati operation in Santa Monica, California, transferred to Dulce in 1977.

He has estimated the number of “greys” from Dulce to over 18,000 but has also seen numerous High humanoid reptiles.

He knew of the existence of seven levels of the base, although he admits there could be more, and aliens were at the last three levels. T

he degree of security increases with the level.

The only sign in English was above the transport station, which was “towards Los Alamos,” another major reptilian underground base in New Mexico.

But most of the Dulce signs are in “alien symbolic language”, a universal system of symbols understood by humans and aliens.

The Illuminati communicate on the surface in symbolic language.

It is supposed that origin, Sumerian, Egyptian and Chinese hieroglyphs were a reptilian or alien language.

Castello said there was a vast network of underground transport links under the United States, which extends into the global tunnel and underground system.

Dulce Base is supposed to contain 7 levels:

Level 2 – for UFOs and other ships;

Level 4 – Laboratories for human aura research, as well as for manipulation of dreams, hypnosis, and telepathy. For example, you can reduce your heart beats with delta waves, and you can track mind reactions with chips inserted into the brain;

Level 5 – the witnesses described huge pots of liquids, with parts of the human body – as in a horror movie. Here are cages for men, women, and children, kept for experiments; 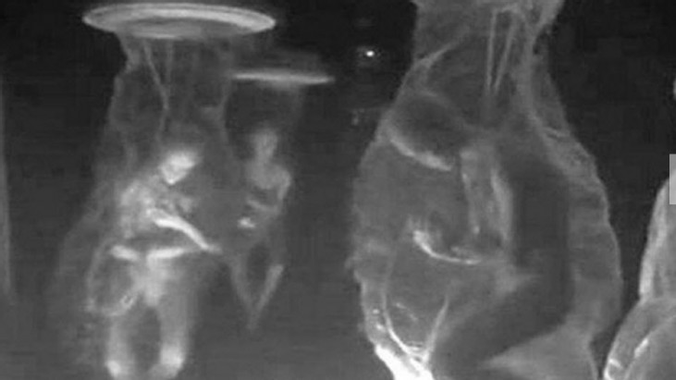 Level 6 – or “Hall of the Nightmare” – contains genetic laboratories. Every kind of animal and animal crosses are being tried. More humanoid creatures with more than 2 feet and 2 hands would have been genetically produced here;