The former French Education Minister, Luc Ferry, ordered police to start firing bullets into crowds of demonstrators, claiming that senselessly killing them would “put an end to the violence.” In an interview on Classic Radio, Mr. Ferry said: “What I don’t understand is that we don’t give the means to the police to put an end to this violence.”

When it was suggested to Ferry that police using guns might lead to fatalities, Mr. Ferry said: “So what?”

“Listen, frankly, when you see guys beating up an unfortunate policeman on the floor, that’s when they should use their weapons once and for all. That’s enough!”

Dailymail.co.uk reports: Police were attacked in major cities including Paris last Saturday on an ‘Act VIII’ Day of Rage by the Yellow Vests.

The movement – which is named after the high viz jackets all motorists have to carry in France – also set fire to buildings as police batons, tear gas and water cannon were used against them.

Particularly aggressive scenes were filmed in the French capital, where a former champion boxer beat up two gendarmes on a Seine bridge.

But what the media won’t tell you is that the police have been acting as real thugs and Nazis for past weeks, since the yellow vests movement started.

We have seen scenes of riot policemen beating peaceful protestors, young girls, old people who were here peacefully,some people even lost their eyes because of policemen shooting at them with “flash-ball” guns. An old woman was even killed by a tear gas canister who was shot into her appartment, yet the media never blamed the police.

These videos and images of such nazi SS-like acts have sparked even more anger and a sense of of injustice in people’s eyes and that’s why in more recent yellow jackets protests we have had many riot policemen injured by protestors. People are sick of letting these fascist policemen abusing them, hey now fight back !

here’s a video showing the violences performed by the french “Nazi” police during the yellow jackets protests:


But of course the media and the french government has been waiting for this to happen since the beginning, that’s why they gave orders to the riot police to provoke protestors, to shoot tear gases at them without any reasons and so on… They knew the people would fight back and that is now their excuse to push their false narrative, saying that the yellow jackets movement is a far right extremist and violent movement when in fact it is not. The government has made it violent. 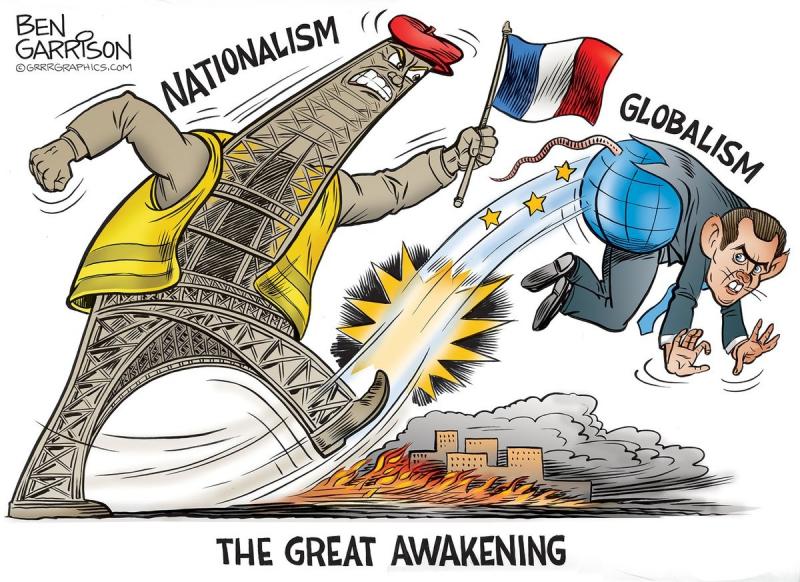 Now that we have seen what’s really going on, lets get back to this globalist scum known as Luc Ferry:

Speaking to Classic Radio, Mr Ferry added: ‘We have the fourth largest army in the world, and it is able to put an end to this c***.

‘These kind of thugs, this kind of c*** from the extreme Right, the extreme Left and from the housing estates that come to hit the police, that’s enough.’

The Classic Radio presenter corrected Mr Ferry, saying that the majority of the rioters were not from suburban high rises, but were instead working class people from the provinces.

Those Yellow Vests arrested so far tend to have jobs, and largely hold conservative views.

Mr Ferry conceded: ‘The problem is that it is a movement that has attracted the support of 80 per cent of the French. When we get to that point, we have to go back to the electorate.’

Mr Ferry is a former lover of Carla Bruni, the model and pop singer who became conservative Prime Minister Nicolas Sarkozy’s third wife when he was in office.

Mr Ferry was Education Minister in the government of Mr Sarkozy’s predecessor, Jacques Chirac, in the early 2000s.

Mr Macron’s government has launched a crackdown on the Yellow Vests, pledging a new anti-riot law to deal with them.

The government wants to draft new legislation that will ban known troublemakers from protests, and will stop masks being worn at demonstrations.

Mr Philippe also announced that there will be 80,000 police and gendarmes on the streets of France this weekend, including 5000 in Paris.

‘Those who question our institutions will not have the last word,’ said Mr Philippe, who refused to signal an official State of Emergency.

As you can see France as now become a facist, dictatorial country ran by globalist puppetssuch as Macron and Edouard Phillipe  taking their orders from the E.U burreaucrats.

As much as they would like to, The French Revolution is not stopping any time soon.