Finally, the corporate giant Monsanto, an organization that has hailed itself as the answer to global food shortages and is “working to help farmers grow food more sustainably” has been outed and is currently facing backlash after a near $300 million lawsuit was settledproving that glyphosate, the active ingredient in the RoundUp herbicide, causes cancer.

The company was found guilty of malice and covering up the fact that their most popular product does indeed cause cancer.

On their website, it still states that “Glyphosate has a 40-year history of safe and effective use. In evaluations spanning those four decades, the overwhelming conclusion of experts worldwide, including the Environmental Protection Agency (EPA), has been that glyphosate can be used safely.” Seems they are still in denial, despite the lawsuit.

This is great news, however, as this story was too big to be kept from the mainstream. Many are starting to wake up to the fact that Monsanto isn’t as safe of a company as they would like you to believe. 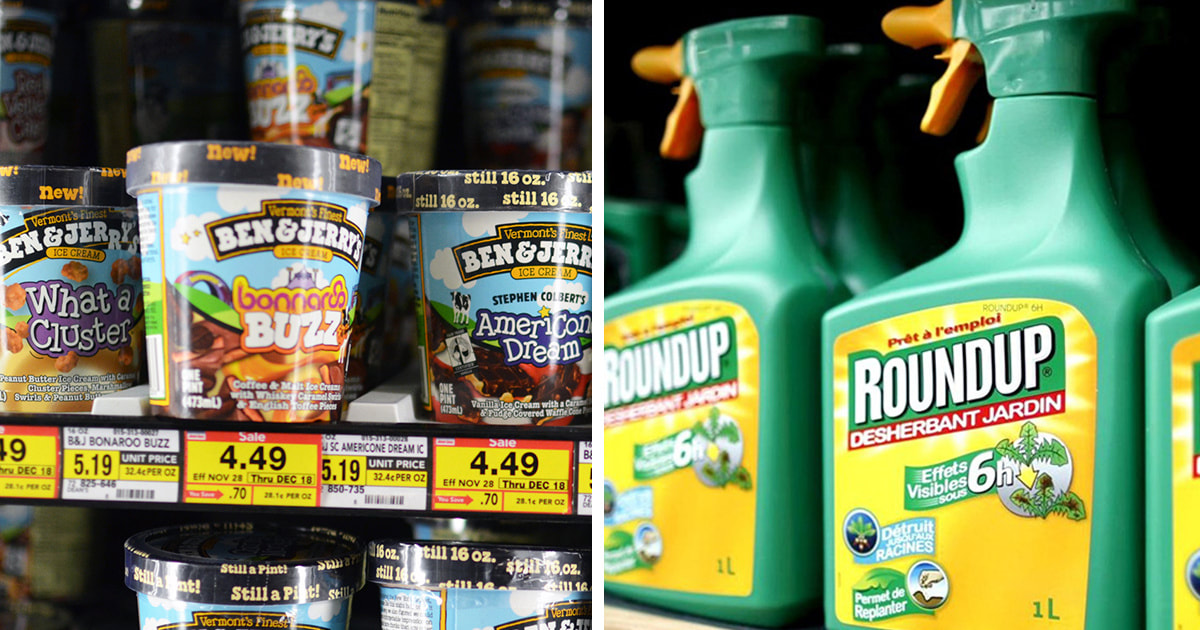 Despite years of mounting evidence that glyphosate is carcinogenic, Monsanto has been able to deny the fact, stating that no products contain a high enough level to pose a risk, failing to acknowledge the cumulative effect within the body.

“Americans have applied 1.8 million tons of glyphosate since its introduction in 1974. Worldwide, 9.4 million tons of the chemical have been sprayed onto fields. For comparison, that’s equivalent to the weight of water in more than 2,300 Olympic-size swimming pools. It’s also enough to spray nearly half a pound of Roundup on every cultivated acre of land in the world.” ~ Newsweek

Which Foods Have Glyphosate?

The issue is, it can be difficult to know exactly which products are genetically modified, and thus are likely to contain Monsanto’s Roundup herbicide or some form of glyphosate.

In the past, a safe bet was to be sure to purchase only organic products; however in recent years even certain brands of organic foods have been compromised as glyphosate has been found in some of these as well.

Thanks to WakingTimes for providing this list of foods containing glyphosate:

Breakfast Cereals as Tested by the Environmental Working Group(2018)

Orange Juice Brands as Tested by Moms Across America (2017)

Staple Crops as Reported by Friends of the Earth Europe (2013)

The most effective way to avoid glyphosate in your diet is to eat a whole-food plant-based diet, which means limiting your intake of processed foods as much as possible. Look for the “Non-Gmo Verified Project” stamp to ensure your foods do are not genetically modified and thus should not contain glyphosate.

The fact of the matter is, the more informed we are in regards to these chemicals, the more power we have over our own health. It’s up to us to take responsibility for our own lives, our bodies and what we are putting inside. Vote with your dollar and avoid GMO’s whenever possible.