The secret society of the Illuminati is being talked about a lot of times and attracts people who would like to know more about how “enlightened” the Illuminati group is. There were numerous theories about how the Illuminati works and it is no wonder that some of it may be hoax. One video that features an alleged “illuminati slave” got the attention of a lot of people as she spills some juicy details about the group and her shocking expose regarding the humans and reptilians connections.They believe that she experienced the MK Ultra project. They even claim that she is a mind-controlled ex-Illuminati slave that broke her programming. The woman is identified as Gabriela Rico Jimenez.

Project MKUltra — sometimes referred to as the CIA’s mind control program — was the code name given to an illegal program of experiments on human subjects, designed and undertaken by the United States Central Intelligence Agency (CIA). Experiments on humans were intended to identify and develop drugs and procedures to be used in interrogations and torture, in order to weaken the individual to force confessions through mind control. Organized through the Scientific Intelligence Division of the CIA, the project coordinated with the Special Operations Division of the U.S. Army’s Chemical Corps. The program began in the early 1950s, was officially sanctioned in 1953, was reduced in scope in 1964, further curtailed in 1967 and officially halted in 1973. The program engaged in many illegal activities;in particular it used unwitting U.S. and Canadian citizens as its test subjects, which led to controversy regarding its legitimacy. MKUltra used numerous methodologies to manipulate people’s mental states and alter brain functions, including the surreptitious administration of drugs (especially LSD) and other chemicals, hypnosis, sensory deprivation, isolation, verbal and sexual abuse, as well as various forms of torture. – Wikipedia

To further explain what the video is allabout, here’s the explanation from MOJ Video

NOTE: THE ORIGINAL SPELLING HAS BEEN LEFT IN TACT:

Her name is Gabriela Rico Jimenez. Carlos Slim is an actual Mexican elite worth 53 billion US $’s, you can check him on Wikipedia. She is no doubt a mind control victim. It would be nice if someone can confirm the translation, I noticed some spelling errors like “disgusting” so if they can’t spell basic words they mite have messed up the translation. Below is the best translation I can find. ….. the girl is genuinely upset.

shes also pretty enough to get to be somewhere to see something she shouldn’t. i wish i could understand what she was saying. Gabriela Rico Jimenez, twenty-one years, lashed out at staff at a luxury hotel in Monterrey, and accuses the Queen of England to practice cannibalism. I t also denounces the murder of a scream that Murillo (seems to be a leader Antinarco who died in a plane crash in Mexico City where she landed five minutes missing). The girl, who seemed in shock, shouting that she want her freedom and insists on asserting that they ate humans, referring repeatedly to the Queen Elizabeth II of England, among other s. Although the news has been called a crazy and distorted information, it behaves as if it had witnessed something difficult to digest, and hence its status nervous and deeply upset .

One of the things she says is that “everything started in 2001, the one that knows the truth of what really happened is Carlos Slim” (he is the the worlds 3rd richest man, and the guy that owns Telmex, a phone company and other stuff ). 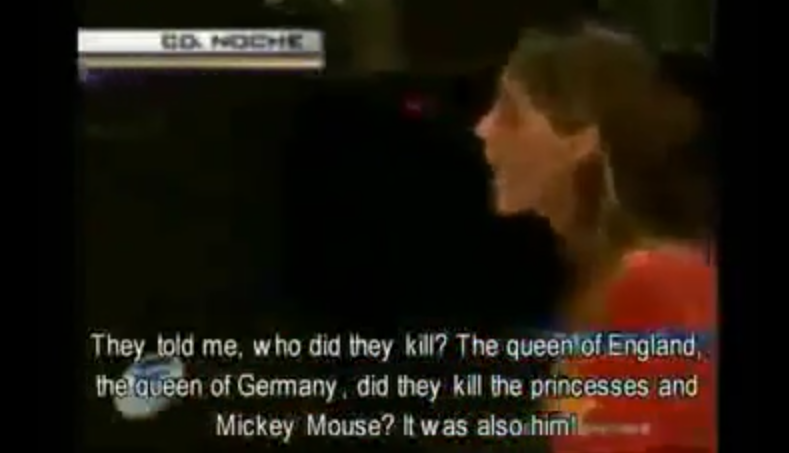 Here’s the blow by blow remarks made by Gabriela that could totally give you the creeps.

NOTE: THE ORIGINAL SPELLING HAS BEEN LEFT IN TACT:

“I want you to give me the maximum sentence, so Scotland, and Russia, so all the countries __, Murillo wouldn’t be ashamed of her sons, because they’re worth so much, cause they need their father, you’re a __, and its gonna hurt your soul!” 3:19 “Leave me alone! Get away from me! You took me to the police station, didn’t you? and then you took me to the hospital. YOU! you were there, weren’t you?!” 3:34

“That’s why they killed the Queen of Scotland, the Queen of England!” (then she mentions something about the princesses of Disneyland) “They killed a lot of people! They ate humans!” 4:13

“I mean, I didn’t know what was there, but THEY ATE HUMANS! They smell like human flesh!” (I think she’s talking about whoever ate human flesh or something. ..) “No, where are you taking me?! I’m not going anywhere until everything gets clarified! ” 4:36

“You were the ones that kept me there! You were there to retrieve a copy so you – 4:43 Oh, and she was talking about Mouriño, who was a member of the government , but he died in a crash plane under mysterious circumstances, right after being criticized by another party and various people. Gabriela Rico Jimenez: “They had eaten human Curious … This Mexican girl of 21 years, in what seems at first sight, a scene of someone who has lost the “reason” may be saying (or saying) things of which we called “conspiranoicos ” We know a lot. And something strange is that Carlos Slim complaint regarding the death of Mouriño and royalty and accusing others of “cannibalism.” All this while the media trying to discredit her as a “more crazy” and “crazy girl”

“They ate human, I was not aware of anything, I had … or if the killings .. But they had eaten human, human! (4:11 minutes) Note that it mentions names like “mickey mouse” or “superman” that journalists used to reinforce the theory of madness, but that may well be mental programming keywords (MKULTRA). As many know Illuminati use. Pedophile networks using names such key names that are familiar to children, she also mentioned that all this started around 2001 meaning if she is now 21 years she was probably only a girl. See later in the minute 5:18 where the reporter is clarifying note, the head of the newscast interrupted to say “Well yes, said incoherent things” just when the reporter was listing the things Gabriela said, and could have passed unnoticed to people. Otherwise, you will see during the video there is some kind of censorship that is used when saying “swearing” but only where the girl sometimes you can see the lips, saying that he was not swearing, but otherwise, but unfortunately lost in the censorship I would like to see the full video with no edits.

“ Is it really true that humans are being eaten by reptilians? Is she saying the truth ?