There is a growing consensus in the narrative within the alternative news community (commentators, their insiders, and members in general) that has become too big, too coherent to ignore. Even among the more skeptical of the commentators who have long bemoaned that real tangible action of disclosure and legal proceedings seems to be taking forever, there is now a real optimism, even a certainty among several, that this time things will be different.

Qanon Posted This not long after After Brett Kavanaugh’s Confirmation: “Are You Ready to see arrests? Are you ready to see pain? Are You ready to be part of hystory? Q”. 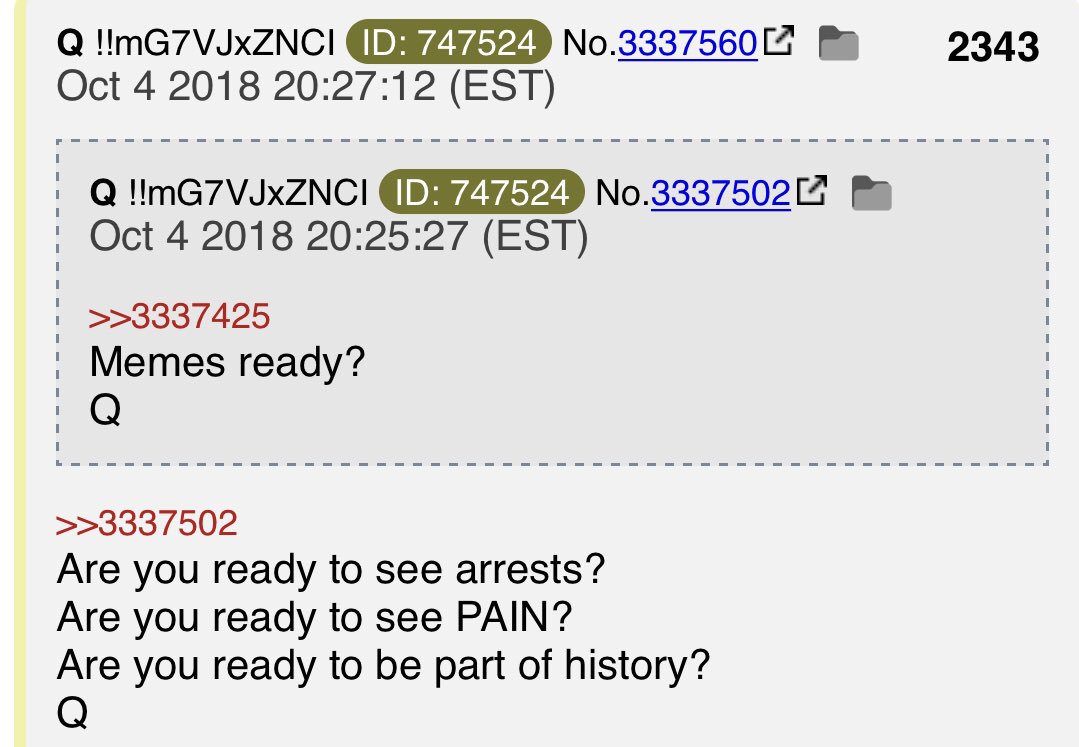 The broad strokes of the narrative go as follows: Donald Trump was originally asked by a military and political Alliance of patriots to run for office, and the election of Donald Trump in 2016 represented the triumph of this Alliance over the Deep State and their chosen candidate Hillary Clinton. Trump ran on an anti-establishment platform that resonated with awakening voters as Trump promised to ‘drain the swamp’–essentially indicating that crimes that were being committed against the American people would be brought to light and the Deep State insiders perpetrating them would be brought to justice.

Since Donald Trump took office, the Alliance has been working meticulously to convene secret Grand Juries to indict Deep State criminals, keeping the indictments sealed until everything lines up to enable them to make mass arrests and begin military tribunals. The confirmation of Justice Kavanaugh seems to pave the way for legal support from the Supreme Court, as needed, to authorize actions that will get the ball rolling such as the release of unredacted FISA Documents which will lay bare the complicity of key players gumming up the works such as US Deputy Attorney General Rod Rosenstein, which will lead to their removal from power and finally end Deep State obfuscation.

What The Commentators Are Saying

There are many commentators in the alternative news community who have been at this game for a long time, and to be at this game for a long time, one needs to be in the habit of being circumspect and objective when it comes to making unverifiable claims about actions that will soon come to pass. There is a sense, though, within the community, that insider testimony, outside evidence, and the sometimes cryptic political maneuvers and messages that are now taking place on a regular basis are all converging into the narrative described above, such that it is no longer a question of if the Deep State will be removed from power, but when.

The similarity of opinion is striking, as you will see from the small handful of comments below that I’ve grabbed from some recent posts and videos:

‘You’re going to see arrests, and you’re going to see indictments, and then you’re gonna see convictions, and some of them will spend the next 10 years just going from their cell to the courtroom, before they’re even tried and convicted, which they will be. They are scared to death.’–John B. Wells

‘The prosecution of these criminals is set to finally start now that the U.S. military government backing President Donald Trump has secured a majority on the Supreme Court with the confirmation of Justice Brett Kavanaugh, Pentagon sources say.  “Attorney General Jeff Sessions has already met with the real special prosecutor, U.S. Attorney John Huber in Utah, so that the 57,000 indictments may be unsealed,” the sources explain.“The seating of Kavanaugh on the Supreme Court should unleash declassification of FISA and other documents as well as military tribunals,” the sources say.’–Ben Fulford

‘Amendments were passed to the Manual for Military Courts-Martial in 2018 that make this possible, among other legal maneuvers. Corey Goode’s trusted insiders also reported last week that military courts were being formed, and would work in conjunction with the Department of Justice and Attorney Generals at the state level.’–David Wilcock

‘The Deep State’s on the run, the Deep State is panicked and we’re about to enter a rule of law reset. The first phase: Kavanaugh. The second phase: Declassification. <The third phase:> Military Tribunals will go into effect for the high-level players when it comes to sedition and treason.’–Dave Janda

‘The Deep State is terrified of military tribunals. We are still in a state of war. Technically, it is legal right now for military tribunals to take anybody who is considered an agent of a foreign power and try them under a military tribunal rather than in a US court of law. I think that is the bottom line. Kavanaugh is about helping Trump take down the Deep State.’–Robert David Steele

I suppose the question is, is this near-certainty and optimism justified? We have to face the fact that such ‘imminent’ predictions have been given alternative news air-time from many different corners of legal and military activism for many years now. Some of the most vocal commentators lost their popularity and their credibility as a consequence when historic actions did not unfold as predicted. And information from anonymous insiders is difficult to completely trust, because it’s, well, anonymous, and therefore unverifiable. So we have to ask the question as to whether these people are mostly reading each other’s mail, or if there is enough substantial and verifiable evidence for us to put stock in the claim that a Deep State takedown is underway.

Much of the cohesion in the alternative news community stems from the ‘Q-Anon’ phenomena. For many analysts, the consistency, reliability, insight, and authoritative voice of the posts of Q-Anon on the 4Chan and 8Chan online forums have been enough to convince them that Q-Anon represents a group of White House insiders, probably made up of or informed by ‘white hat’ political, military, and intelligence personnel that have direct access to President Donald Trump, if indeed he is not directly part of this group. Q refers in his drops to all of the pieces of evidence below and often helps to create a context that points to their significance.

On December 21st, 2017, Donald Trump signed the ‘Executive Order Blocking the Property of Persons Involved in Serious Human Rights Abuse or Corruption.’ Those well-versed in the crimes and manipulations of the Deep State find, in this document, an incontestable effort to seek to reveal and prosecute the kinds of crimes that have been ignored or hidden from public view by previous administrations. As Dr. Michael Salla notes in his article,

While the mainstream media has largely ignored Trump’s Executive Order, the alternative media has been paying close attention. Many have noted the Executive Order is far more significant than what it appears to be on the surface. Rather than just freezing the financial resources of foreign citizens linked to the Russian sphere of influence, as it superficially appears to do, it is really targeted at members of the “Deep State” (aka Cabal or Illuminati)  that have been involved in human trafficking, pedophilia and systemic corruption all over the planet.

This interpretation is supported by the words and actions of Attorney General Jeff Sessions. Again, there are signs that this administration is willing to speak tough about and bring to light the types of crimes, including human and drug trafficking and dark web activities, that are being perpetrated by the Deep State and that previous administrations dared not make a mention of.

Attorney General Jeff Sessions hosts law enforcement officials from around the Western world at the DOJ’s Robert F. Kennedy building in Washington D.C., to discuss ways our nations can work together to combat transnational criminal organizations that “are so powerful and so wealthy” that they “threaten the very sovereignty of nation-states.” Sessions does not specify exactly which organizations he is referring to, but he does mention drug and human trafficking, the dark web, and terrorism. “The day I was sworn in as Attorney General, the president ordered me to focus on dismantling transnational criminal organizations at the DOJ,” Sessions said. “We’ve been faithful to that order.” (source)

Sessions has also spoken directly about the fight against child sex trafficking, and his words about tackling the crimes associated with the Deep State have been backed up by actions, as noted in this article about ‘Operation Broken Heart’, ‘Justice Task Forces Arrest 2,300 Online Child Sex Suspects.‘

Check out @lonegreyhat for stats on how many have been unsealed

Why this is considered significant is because there have been on average over 5000 new indictments created each month, while the norm is noted to be a little over a thousand per year.

Adding fuel to the fire is Q, who points us to the idea that the appointment of federal prosecutor John Huber to work in concert with Inspector General Michael Horowitz is what is allowing for the possibility that so many sealed indictments are being created, each of which require the convening of a secret grand jury.

As noted in the article Q refers to,

President Trump should be very happy that Sessions chose this route of appointing Huber, who has the power to seek indictments and prosecute cases, and teamed him up with Horowitz, who has 470 investigators at his disposal, if the president wants to see swift and decisive action.

During the Kavanaugh confirmation hearings, Senator Lindsey Graham went through a line of questioning which many are casting as a dramatic foreshadowing of events soon to come:

This exchange is unusual because on its own it does not seem as though Lindsay Graham is asking these questions to know about Kavanaugh’s opinion on the matter, but rather seems to be trying to educate the public as to the difference between basic criminal law and the law of armed conflict. More specifically, he appears to be sending a message out to perpetrators of the law of armed conflict–which includes those who have ‘collaborated with the enemy’ against American citizens–that they can and will be prosecuted in military tribunals.

The Body Of Evidence

Taken separately, these pieces of evidence and others I haven’t mentioned are not enough to justify confidence that the removal from power of a force that has served as our authority all our lives is about to happen right in front of our eyes. However taken all together, many commentators with years of experience feel that they all contribute to a hidden reality that finally, humanity has gained the power to bring the crimes and obfuscations perpetrated by this authority we call the Deep State to light.

We have seen that these crimes are rife in virtually all fields of human endeavour: finance, politics, education, health, entertainment, religion, science, and the list goes on. These have been perpetrated, it would seem, all in the name of control and enslavement. In the words of the late William Thompkins, “We’ve been lied to about everything.” And while some of the information will be difficult for us to hear, the truth about these matters is indeed poised to set us free.