A former Democrat lawmaker has accused ‘creepy’ Joe Biden of inappropriately fondling and kissing her in 2014.

Lucy Flores, the former Democrat nominee for Nevada Lieutenant Governor, claims Biden sexually molested her in a story she wrote in “The Cut” titled, “An Awkward Kiss Changed How I Saw Joe Biden.”

Thegatewaypundit.com reports: Flores, then 35, (pictured below) stated then-Vice President Joe Biden reached out to her campaign to help her team and other Democrats in Nevada to help boost voter turn out shortly before the election. 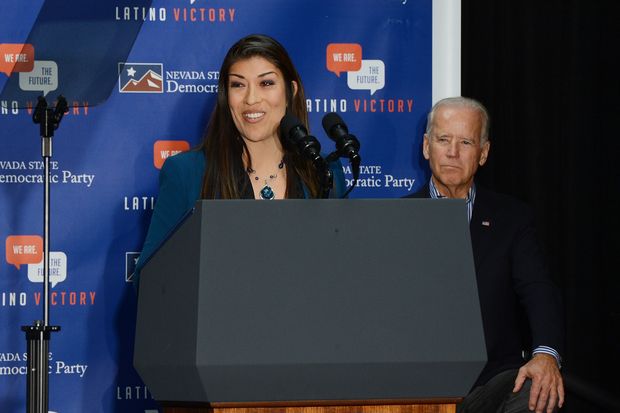 Ms. Flores described how she was standing in a ‘holding room for speakers’ preparing to go on stage at an event in Las Vegas just days before the November election when Biden groped her — the young Democrat hopeful said she was in total shock and mortified over the incident.

As I was taking deep breaths and preparing myself to make my case to the crowd, I felt two hands on my shoulders. I froze. “Why is the vice-president of the United States touching me?”

I felt him get closer to me from behind. He leaned further in and inhaled my hair. I was mortified. I thought to myself, “I didn’t wash my hair today and the vice-president of the United States is smelling it. And also, what in the actual fuck? Why is the vice-president of the United States smelling my hair?” He proceeded to plant a big slow kiss on the back of my head. My brain couldn’t process what was happening. I was embarrassed. I was shocked. I was confused. There is a Spanish saying, “tragame tierra,” it means, “earth, swallow me whole.” I couldn’t move and I couldn’t say anything. I wanted nothing more than to get Biden away from me. My name was called and I was never happier to get on stage in front of an audience.

Joe Biden was supposed to be there to promote her, instead, Flores said he made her feel “uneasy, gross and confused.”

“The vice-president of the United States of America had just touched me in an intimate way reserved for close friends, family, or romantic partners — and I felt powerless to do anything about it,” Flores wrote.

Imagine you’re at work and a male colleague who you have no personal relationship with approaches you from behind, smells your hair, and kisses you on the head. Now imagine it’s the CEO of the company. If Biden and I worked together in a traditional office, I would have complained to the HR department, but on the campaign trail, there’s no clear path for what to do when a powerful man crosses the line. In politics, you shrug it off, smile for the cameras, and get back to the task of trying to win your race.

Flores said she told a few of her staff about Biden’s touchy feely grope session, but didn’t plan on telling anyone else — he was the Vice President of the United States, she said, so she moved on with her life.

What prompted Flores to come forward and tell her story was seeing other pictures of Biden groping women and young girls surface.

Time passed and pictures started to surface of Vice-President Biden getting uncomfortably close with women and young girls. Biden nuzzling the neck of the Defense secretary’s wife; Biden kissing a senator’s wife on the lips; Biden whispering in women’s ears; Biden snuggling female constituents. I saw obvious discomfort in the women’s faces, and Biden, I’m sure, never thought twice about how it made them feel. I knew I couldn’t say anything publicly about what those pictures surfaced for me; my anger and my resentment grew.

Flores wrote that she thought about the backlash she would receive over coming forward with her story about ‘creepy Uncle Joe Biden,’ but hearing about his potential candidacy for president became “too much for her to keep bottled up any longer.”

It  has documented many of the different times Joe Biden has inappropriately touched young children, mainly prepubescent daughters of lawmakers during swearing-in ceremonies.