In Scandinavian mythology Thor is a god who protects the Aesir gods and humans from giants and monsters. Without his help, they are almost defenseless. Thor fights with his main enemy, the serpent of Midgard and other fearful giants of Jötunheimrwith whom he shares their strength and courage.

One of them is Hrungnir, a giant from Jotunheim, and his story is told in Skáldskaparmál, in the Prose Edda by Snorri Sturluson.

How Did Hrungnir Lose His Life?

He was killed by the god Thor with his powerful hammer, Mjölnir but before it happened, Hrungnir met Odin, the All-Father of Nordic Gods. One day, Odin went to Jötunheimr, accompanied by his miraculous eight-legged horse, Sleipnir. He arrived at the hall of Hrungnir, strongest of all the giants. At once, Hrungnir was delighted with the stranger’s brilliant steed. 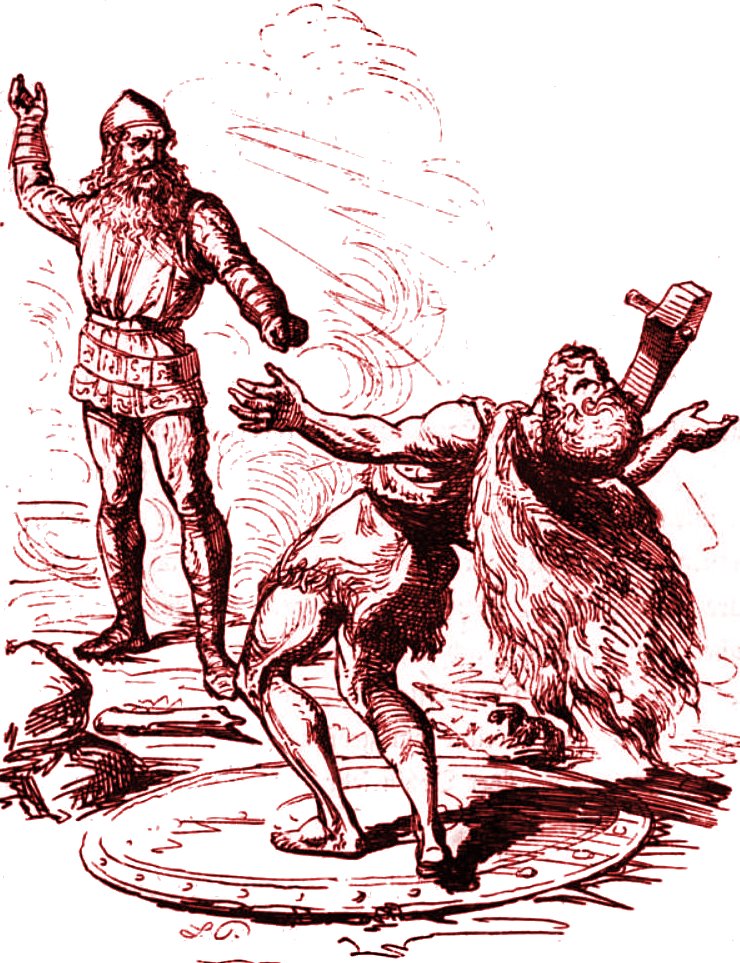 ‘Who are you?’ Hrungnir asked and when Odin did not answer, Hrungnir continued:

‘I’ve been watching. I saw you coming, your gold helmet flashing under the sun. You seemed to be riding as much through the air as on the ground.’ ‘That’s an uncommonly fine horse you’ve got there.’

‘Better than any in Jotunheim,’ retorted Odin. ‘That’s for sure.’

‘That’s what you think,’ replied Hrungnir.

At once, Hrungnir proposed a race, declaring that his steed, Gullfaxi (golden-maned), could rival Sleipnir in speed. The race started and the two competitors and their horses raced across the gigantic flatlands but neither gained ground on the other; then they raced across the uplands and Hrungnir – being fully occupied with the chase – did not notice the direction in which they were going. They crossed the nineteen rivers and suddenly, the giant Hruingnir found himself inside the walls of Asgard. In this moment, he knew who his competitor really was. 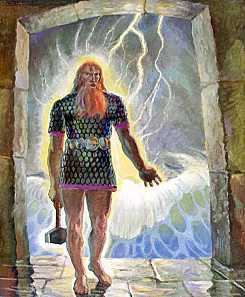 ‘You must be thirsty after such exertion,’ Odin said. ‘Let Gold Mane drink from this torrent Thund. And you, Hrungnir, come and drink in Valhalla.’

In Asgard’s banqueting halls, the heavenly mead was set before Hrungnir and he was soon so intoxicated and excited that he began to boast of his power, declaring he would one day destroy Asgard, kill all the gods, and abduct Freya and Sif.

It was agreed that Thor and Hrungnir would fight in a duel and they would meet at Griottunagard (‘Place of Stones) in Jottunheim.

Thor would fight accompanied by his human servants Thialfi, so the giants – fearing the power of Thor, before the duel – constructed a creature of clay nine leagues tall (about nine miles) long, and proportionately wide, whom they called Mokkurkalfi. 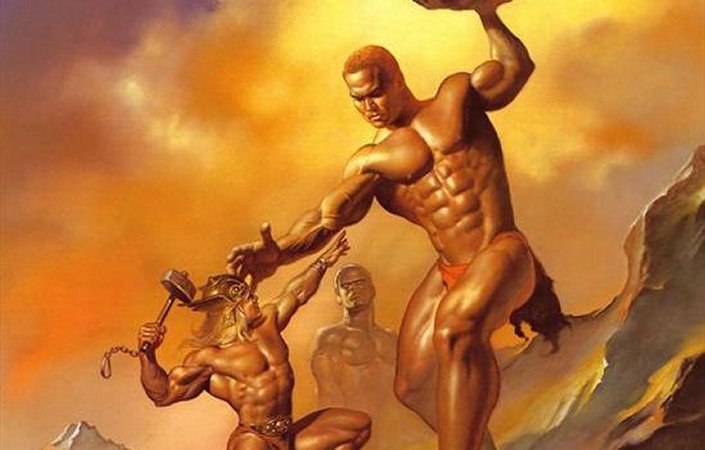 Mokkurkalfi, however, was easily defeated by Thjalfi who attacked the creature with a spade. Then, Thor momentarily attacked Hrungnir’s head with his magical hammer. The giant had no shield in his hand to parry the blow, so he covered himself with his stone club. The club was shivered into pieces that flew all over the places. One of the pieces seriously injured Thor, sinking deep into Thor’s forehead.

U.S. SOLDIER CLAIMS TO HAVE SHOT & KILLED A 12 FOOT GIANT IN AFGHANISTAN

The hammer killed Hrungnir but his falling body fell over Thor, leaving the god buried under the giant’s gigantic legs. Thjalfi went to Asgard and brought all the gods to help, Even the combined strength of them all, was not enough to pull the giant’s foot off Thor’s throat.

Happily, Magni, Thor’s infant son with the giantess Jarnsaxa, was passing by and easily lifted the foot, freeing his father.

Back in Asgard, the sorceress Groa was called upon to remove Hrungnir’s whetstone from Thor’s forehead using her powerful enchantments. At first, Groa cured

Thor’s headache and she further continued her treatment. Thor was so relieved that he wanted to make Groa happy. He told her that he had rescued her lost husband, Aurvandil. He had carried him across the poisonous stream Elivagar.

Now Aurvandil was safe and waiting for Groa. Groa was so happy at the news that she ran from the hall. In her excitement she forgot to cast a magic spell that would remove the stone from Thor’s head.