Researchers from the National Institute of Anthropology and History (INAH) of Mexico have discovered a set of ‘tunnels’ leading to the ‘underworld’ beneath an ancient Pyramid in Mexico.

According to the National Institute of Anthropology and History (INAH) of Mexico, researchers have come across a ‘hydraulic system’ located under the alleged tomb of King Pakal II in Palenque.

According to reports, the underground tunnel system connects to another, and is made of stone and approximately 40 centimeters wide and tall.

In the Temple of Inscriptions, where the king of Palenque; Pakal the Great was buried, an engraving indicates that in order to be received into the underworld, one must dive into the water of the God ‘Chaac’.

The director of the archaeological project, Arnoldo Gonzalez Cruz said that with the recent discovery of the tunnel system located underground, beneath the burial chamber of King Pakal II, this metaphor could have a much more sophisticated interpretation and give new data on the construction and use of the great pyramid located in Mexico. 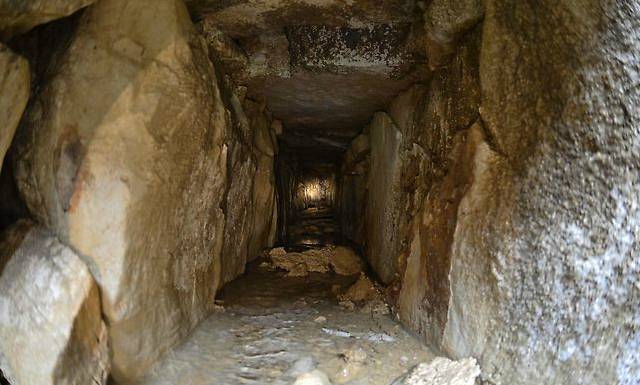 The tunnel, which connects to another, is made of stone and is about 2ft (60cm) wide and tall.

Researchers explain that the complex network of canals built in the seventh century A.D. was arranged in different levels, and guidelines were planned and designed long before the pyramid was projected.

“The presence of these channels is quite an important and very significant,” said González Cruz.

In fact, the discovery of the so-called hydraulic system is so important that it restates the original theory about the construction and purpose of the pyramid.

Much attention has been given to the carved stone sarcophagus in which King Pakal was buried which many believe depicts the Maya ruler seated in what appears to be a spaceship, lifting off to the stars.

However, Gonzalez says that the carvings found on a pair od stone ear plugs found in the grave say a god “will guide the dead toward the underworld, by submerging (them) into the water so they will be received there.”

This means that Pakal didn’t fly off into space; he went down the drain. “There is nothing to do with spaceships,” Gonzalez said.

The original theory proposed by archaeologist Alberto Ruz Lhullier suggests that the burial chamber of King Pakal II is the starting point of nine of the bodies that make up the Temple of the Inscriptions. However, the new evidence suggests that the center may have been marked by the existence of a spring.

The sarcophagus of king K’inich Janaab’ Pakal or more commonly known as King Pakal is one of the most talked about subjects when it comes to the ancient alien theory. The sarcophagus lid of this great Maya rulers has some pretty curious depictions. 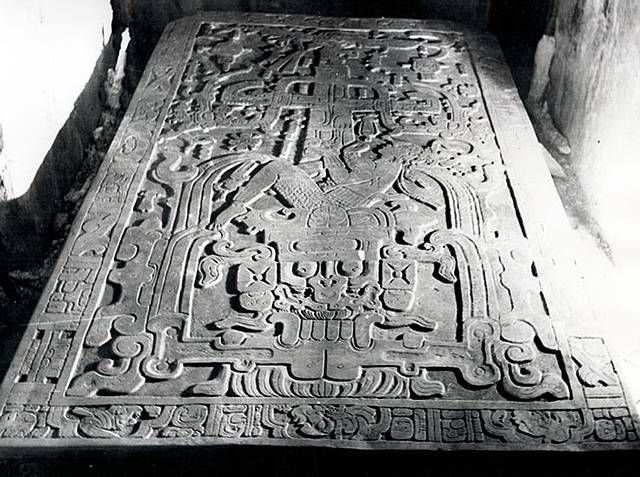 Ancient alien theorists propose that it clearly depicts King Pacal in some sort of spaceship during takeoff, and they argue that his hands appear to be manipulating some sort of machinery.

Swiss author Erich Von Daniken suggested in his 1968 book Chariot of the Gods that the curious sarcophagus lid of the Ancient Maya ruler resembles an astronaut sitting inside of a spaceship.

However, experts disagree and suggest that the alleged flames seen depicted on the sarcophagus lid are in fact ancient Maya depictions of the ‘Word Tree’ or ‘Tree of Life’ whose roots are said to reach into the underworld.