This book follows a series of excerpts of the Old Testament, offering its true meaning, the same given in its literal translations, that is the alien creation of man; the truth about the ten commandments; the visions of the UFOs the prophets had as they themselves told us; the passage in which the Old Testament affirms in a puzzling way that God dies as all men do; the figures of the angels stripped of all which has been invented over the centuries about them; the probable source of inspiration of the Gospel of John.

All this is given with the Hebrew text and the literal translation which is clearly brought word by word with an incredibly simple system, comprehensible to every type of reader.

Why was this title chosen? Because the literal translations from the Ancient Hebrew help us to discover what they didn’t know.

* the Bible clearly says that God dies as all men do
* the Bible explains that we have been formed with our creators’ DNA
* The Bible tells us that our creators travelled by flying objects
* the Bible quotes a direct relationship between the UFOs and Sumer, the land of the flying objects’ keepers
* The Glory of God was in reality… a UFO
*The Bible refers to giants and tells where to find their evidence
*The Angels mentioned in the Old Testament, where they are perceived as spiritual beings, however do not exist.
* The Ten Commandments written on the stone were not those that have been reported.
* John the Evangelist drew his mystical doctrines from the Hellenistic literature of his time
* and much more, such as the fact that the Church admits that the Old Testament knew of the aliens.

That is why what we believed to know about the Bible has changed. 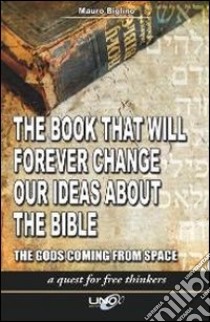 The Author of this book

Student of the history of religions, specialized in the translation from ancient Hebrew, he has translated the Masoretic text for the publisher Edizioni San Paolo. For Biglino, through direct analysis of the Hebrew texts of the Bible, knowledge and understanding of religious thought is today more accessible. Biglino translates literally what he reads in the Old Testament, deliberately ignoring those aspects of the faith, reserved for the personal sensitivity. Biglino therefore proposes an examination of the Old Testament through the literal translation of the Hebrew text, the Biblia Hebraica Stuttgartensia. In particular, he emphasizes the technological knowledge of those who, according to the author, would have created man in his own image and likeness. Furthermore, he shows that, in the biblical texts, there are references to alien craft – or at least to devices built using technologies not known at the time and not compatible with the level of technological knowledge of the period – and the presence of beings from other planets. In addition to the UFO theories, he exposes translations that differ in form and in content from those adopted by the major religions. In his book “The Bible is not a holy book,” the author focuses on how the divinity, spiritually speaking, would not be present in the Old Testament, and also questions possible changes to the text during the centuries.