The surface of the Earth holds subtle health-boosting energy. All we have to do is touch it and become truly alive. In the documentary film Grounded, you can see this amazing phenomenon transform the life of people who had been struggling with health issues like chronic pain, and one man who had been wheelchair-bound for decades is able to walk again.

Even plants are drastically impacted when they are taken away from the Earth’s natural energy. Yet, the act of grounding, or Earthing, as it’s sometimes called, isn’t really an unusual phenomenon at all. It’s actually a natural act that virtually every living creature does instinctively.

Your Body Needs Its Connection to the Earth

In the film, you’ll see an orphaned baby moose that instinctively lies on an Earthing pad to connect him to the Earth while he’s being temporarily housed in a trailer. The moose goes to the pad whether it’s concealed or not.

This simple act, which can also be achieved by walking barefoot on the Earth, transfers free electrons from the Earth’s surface into your body that spread throughout your tissues.
The effect is sufficient to maintain your body at the same negatively charged electrical potential as the Earth. This simple process is called ‘grounding,’ and its effect is one of the most potent antioxidants we know of. Grounding has been shown to relieve pain, reduce inflammation, improve sleep, enhance well-being and much, much more.

Upon first learning of grounding, most agree that, in theory, it makes sense. But many are still skeptical, and I’m the first to admit that it is hard to believe… that is, until you experience it for yourself.

And the concept of grounding, and its necessity to human (and virtually ever living creature’s) health is not so much of a stretch when you consider that you are already dependent on and intricately intertwined with the Earth.

Every time you take a breath of air or a drink of water, or absorb the ultraviolet light from the sun, you are, in practice, connecting to the Earth and using it for your very survival. Grounding is really one more extension of this; one more way that your body is intelligently designed to co-exist as a part of nature. 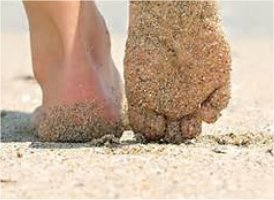 Chances are it’s been awhile since you’ve experienced the benefits of grounding, as most Americans spend most of their waking hours wearing shoes with rubber or plastic soles. These materials are very effective insulators, which is precisely whey they’re used to insulate electrical wires. Yet, they also effectively disconnect you from the Earth’s natural electron flow.

In the featured video below, Grounded, (in which I actually appear) you’ll see how poking holes in the soles of your shoes and inserting a grounding rod can allow you to stay grounded, as can special grounding shoes that are now available (sporadically).

Leather-soled shoes will also allow you to stay grounded with the Earth. Walking barefoot is one of the easiest and best ways to stay grounded, but you’ll need to do so on the proper surface.

The following surfaces will NOT ground you:

In today’s world, this is more important than ever, yet fewer people than ever actually connect with the Earth in this way anymore. Free radical stress from exposure to mercury pollution, cigarettes, insecticides, pesticides, trans fats, and radiation, just to name a few, continually deplete your body of electrons.

Simply by getting outside, barefoot, touching the Earth, and allowing the excess charge in your body to discharge into the Earth, you can alleviate some of the stress continually put on your system. For example, walking barefoot can help ameliorate the constant assault of electromagnetic fields and other types of radiation from cell phones, computers and Wi-Fi.

Grounding Is an Anti-Inflammatory and Helps Thin Your Blood

One of the primary health benefits of grounding is its antioxidant effect. It helps alleviate inflammation throughout your body. The film shows examples of inflammation, demonstrated via thermography, that is significantly reduced following grounding.

This in itself is groundbreaking, since inflammation is at the root of most diseases, including heart disease. Dr. Stephen Sinatra is a prominent cardiologist featured in Grounded. I also interviewed him this year, and you can watch the interview below. Ten years ago, Dr. Sinatra met Clint Ober, who introduced him to grounding.

According to Dr. Sinatra, inflammation thrives when your blood is thick and you have a lot of free radical stress, and a lot of positive charges in your body. Grounding effectively alleviates inflammation because it thins your blood and infuses you with negatively charged ions through the soles of your feet.

Grounding helps thin your blood by improving its zeta potential, which means it improves the energy between your red blood cells. Research has demonstrated it takes about 80 minutes for the free electrons from the earth to reach your bloodstream and transform your blood.

Hypercoagulable (thick, slow-moving) blood contributes to chronic inflammation, because when your blood does not flow well, oxygen can’t get to your tissues. Grounding’s effect on blood thinning is so profound that if you are taking blood thinners you must work with your health care provider to lower your dose otherwise you may overdose on the medication. You can see an example of grounding’s effect on blood cells in Grounded, as well.

However a newer theory is that grounding may actually facilitate the formation of structured water in your body. I previously interviewed Dr. Gerald Pollock on this topic, and afterwards introduced him to Dr. Sinatra. We were all on a conference call and Dr. Sinatra agreed that it made sense and was going to revise his theory on how grounding actually works. 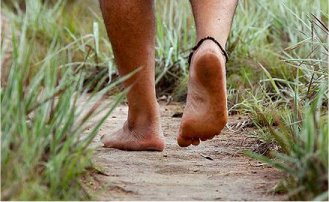 For over 5 years, I have personally prioritized grounding myself as much as possible. It’s a simple concept—to some it may appear too simple. Yet, as you can see in the film this isn’t something to brush off as ‘new-age nonsense.’ It’s supported and backed by prominent medical doctors, scientists including Dr. David Suzuki, NASA astronauts, and, of course, it was used by ancient civilizations who placed strong value on their relationship to the Earth.

One little trick that I have been using for a few years after a tip from Dr. Sinatra is to remove one of my shoes when flying and put my foot on the metal support frame on the seat in front of me. Doing this will ground you to the airplane frame and help mitigate damage from radiation at 35,000 feet. In fact, as I write this I am at 35,000 feet with my foot on the airplane frame. Simple and doesn’t cost anything and if it doesn’t work (which I doubt) there is no harm done. So it passes my criteria of inexpensive non-harmful tips that you can use to take control of your health.

The Tarahumara people of northwestern Mexico are one of the few modern-day cultures that still embrace barefoot living and, famously, barefoot running. The tribes are among the most skilled runners in the world, running up to 200 miles over a two-day period. Notably, they run barefoot and this has been suggested as the reason for their remarkable athletic prowess.

But even if that doesn’t impress you, the anecdotal accounts of residents of Haines, Alaska featured in the film are hard to ignore. These are people like you and me, who took a leap of faith and tried grounding – after all, why wouldn’t you? Doing so is free and you have nothing to lose.

The beneficial impacts on their pain levels, sleep, stress and more were near miraculous. One woman even gave her grounding kit back because she didn’t want to get too well and then lose her disability benefits! And at one of the town’s motels – the first in the US to offer a grounded room to guests – travelers keep coming back because their pain significantly improved after spending just one night in the grounded room.

“In other words, we’re there — we’re in a health mode, as opposed to disease mode. Grounding does that,” Dr. Sinatra explains.

Did ancient cultures know something about this that we don’t? It appears so, as many Gothic cathedrals are built on energy hotspots on the Earth, and are actually designed to channel Earth’s energy to flow strategically through them.

Tips for Staying Grounded Outside or Inside 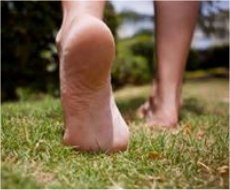 Grounding is not a “treatment” or a “cure” for any disease or disorder. Instead, it can be said without any equivocation that the human body evolved in contact with the Earth and needs to maintain this natural contact in order to function properly. Like eating right, exercising and sleeping, grounding can be described as yet another lifestyle habit that supports optimal health.

Exercising barefoot outdoors is one of the most wonderful, inexpensive and powerful ways of incorporating grounding into your daily life. You can also simply take off your shoes as much as you can when you’re outdoors to take advantage of these natural grounding opportunities.

When indoors, using a grounding pad or sheet is an excellent way to stay grounded while you’re working or sleeping. I typically bring a grounding pad with me when I fly, too, though as mentioned Dr. Sinatra believes that simply taking your shoes off and putting your feet (bare or with socks) on the steel struts will do the trick as well.